The Nigerian Army University Biu (NAUB) decorated the newly promoted Officer and 18 Soldiers on Wednesday, 6th October 2021 at the Lecture Theater I. The Promotion of the Officer and Soldiers was conveyed through a Nigerian Army (NA) letter dated 23rd and 24th September, 2021 respectively.

In his opening remarks, the Deputy Vice Chancellor (DVC) Military, Major General SZ Kazaure said “promotion they say, comes from God and God alone.” He further noted that this year’s promotion like any other promotion in the Army, was guided by the principle of seniority, merit and discipline adding that, to whom much is given much is expected. Finally, he called on the newly promoted Officer and Soldiers to brace up for higher and more challenging tasks ahead.

The Special Guest of Honor, Major General MM Bunza stated that the Officer and Soldiers have been found worthy of their new ranks. In his admonition to the promoted personnel, he insisted that they must be ready for higher and more tasks ahead as the country is facing the most challenging time in her history”.

Captain Osula was decorated with his new rank by the Special Guest of Honor, Major General MM Bunza and was assisted by Brigadier General JO Ariyo (Rtd). Other promoted personnel were decorated by other Senior Officers present.

Leading the advice section, the Director Academic Planning and Quality Assurance, Brigadier General PC Obilor enjoined the promoted personnel to put more efforts in their various duties as Nigerian Army is all about service and responsibilities. He further advised them to ensure that their families feel the impact of their promotions. Other officers also reemphasized Brigadier General PC Obilor’s advice, Major IA Jawondo called on them to maintain discipline and loyalty in their respective roles.

In his vote of thanks, Major UK Osula, on behalf of himself and the promoted Non-Commissioned Officers (NCO) expressed their profound gratitude to the Almighty for their life, the COAS for finding them worthy of promotion and the opportunity to continue to serve the Nigerian Army. He appreciates the NAUB Vice Chancellor, all Senior Officers and the entire University community for their supports. 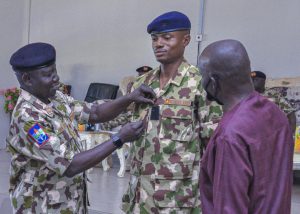 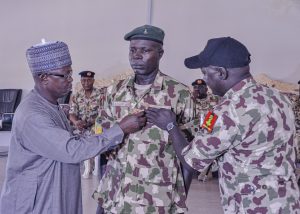 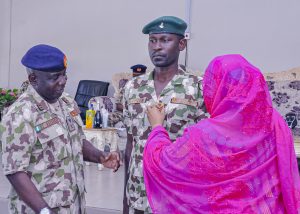