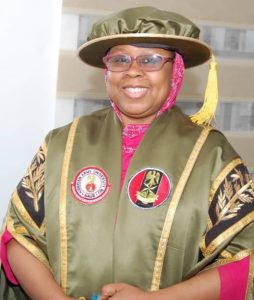 Her outstanding academic achievements within Bauchi State makes her refer to herself as “Made in Bauchi”. This is because her tertiary education was done in ATBU Bauchi beginning from her first degree, masters and PhD. Equally, her entire professional career was accomplished in ATBU, Bauchi, where she started as a Graduate Assistant and rose to the level of Professor of Microbiology. She started in 1991 as a Graduate Assistant and moved to the rank of Assistant Lecturer in 1994 after her masters. There after she got the usual promotions every year to Lecturer II, Lecturer I, Senior Lecturer and in 2009, she became a Professor.

Professor Fatimah Tahir has written over 30 publications in reputable journals, a few are:

She has held so many administrative responsibilities in the university which include among others;

Prof Tahir has served and is still serving in Governing Councils, and Boards of College of Education, and many NGOs. Prof Tahir is a reputable lead researcher and member of many research groups in ATBU, a beneficiary of the third world organisation of women in science (TWOWS) research grant award, Professor Fatimah Tahir was also an external examiner and supervisor to many postgraduate students of MSc and PhD in Nigerian Universities.

She is married with children.