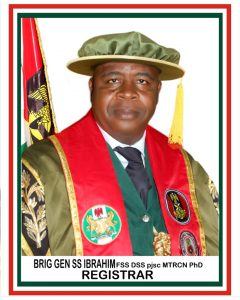 Brigadier General Sani Sumaila Ibrahim was born on 20 March 1967 in Sumaila town, Sumaila Local Government Area of Kano State. The Registrar obtained his first degree in Education at Bayero University Kano in 1989, Masters in Curriculum Studies and Educational Technology in 2000 and Doctor of Philosophy Degree (PhD) in Curriculum Development in 2006 at University of Ilorin.

His military posting profile starts after he was commissioned Lieutenant on 23 Sep 1993 in to Nigerian Army Education Corp. He was an Instructor at Command Secondary School Kaduna (1994-1996), Nigerian Army School of Education Ilorin (1996-2000) and Nigerian Military School Zaria (2003-2004).

He is a member of African Quality Assurance Network (AFRIQAN) and has attended many International Conferences on Quality Assurances for Higher Education organized by Association of African Universities (AAU). He is a fellow of Professional Military Education Network and a member Teachers Registration Council of Nigeria (MTRCN). He has received several awards which includes Forces Service Star (FSS), Meritorious Service Star (MSS), and Distinguished Service Star (DSS). He is happily married. His Hobbies include reading, travelling and exercising.