The Faculty of Arts, Management and Social Sciences is one of the five faculties that debuted in the University and currently in operation. It is, indeed, the largest Faculty as it houses Arts, Management and the Social Sciences, as specified by the current Academic Brief. Since inception, it was operating at the inherited structure from the Nigerian Army Institute of Technology until November, 2020 when it moved to its permanent site, locating two kilometers away.

The Faculty has the following departments under its purview; Departments of Accounting, Languages, Military History, Political Sciences, Management, Sociology and Geography. Under the current arrangement, most of the departments were spread into sub-units for administrative convenience.

The Department of Languages, for instance, currently comprises three units which include; English, Arabic and French. While English and Arabic have admitted students since inception (2018/2019 Academic Session), French is still servicing its sister units and other intra-faculty functions. Similarly, the Department of Political Science has two units viz; Political Science and International Relations. The Department of Management also has the following units; Management, Economics and Transports and Logistics. In the same vein, Sociology comprises Sociology, Psychology and Criminology and Peace Studies.

Profile of Prof. Abubakar S.I. Wakawa, the Dean of the Faculty 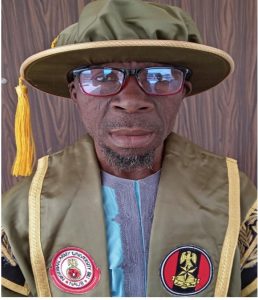 Malam Abubakar Idris Wakawa is a professor of Arabic Literature with a specialization in Rhetoric. He has almost 20 years of university teaching and research experience. As a foundation staff in Nasarawa State University, Prof. Wakawa was the Head of Arabic Unit in the Department of Linguistics where he dovetailed to be the Head of Arabic Studies when the Department was created in 2013. In-between the years, he held another academic position as Exams Officer of the Faculty of Arts; the position he held for seven years.

In 2006, Malam Wakawa was appointed the Sub-Dean of the Faculty, alongside Prof. Olayemi Akinwumi, the current Vice Chancellor of Federal University, Lokoja in Kogi State. They were reappointed and served till 2013 when their two-term tenure expired.

Coming to Nigerian Army University, Prof. Abubakar Wakawa was the pioneer Head of Department of Languages. He set a template that all subsequent heads of the Department took a cue from. He was appointed the Dean of Faculty of Arts, Management and Social Sciences in January, 2020. As a professor, Malam Wakawa is an automatic member of the Senate in Nigerian Army University. This, again, afforded him the opportunity to serve in several Senate committees. They include; Member, F & GPC Committee, Member Library Development Committee, Member, Annual Report Committee and member, Project Council Committee. He is also a member of the University Governing Council.

Malam Abubakar had shuffled his teaching career with administrative experience either as his occupation demanded or as a community service endeavor.  While as a tutor in the College of Arabic and Islamic Studies in Jos, he served as the secretary. He also served as Exams Officer, National Board of Arabic and Islamic Studies (NBIAS), Plateau State Chapter between 1994 and 2004. He was the Murshid and Secretary of the National Council of Muslim Youth Organization of Nigeria (NACOMYO) in Plateau and Borno States, respectively.

He also acted as the Amir of the Muslim Students’ Society of Nigeria (Bocolis Branch) in Borno State between 1988 and 1990, as well as Amir, Shura Committee of the same Society in University of Jos from 1996 to 1997. Other community services Prof. Wakawa rendered included; Chief Imam, Central Mosque, University of Jos from 1995-2002, Chairman, P.T.A. Nurudeen College, Jos (2002-2004) and Member, Care-Taker committee (PTA) Government College, Keffi (2011-2012), among numerous other.

Prof. Abubakar Wakawa has also been a member of several professional and community development bodies. These are too numerous to mention. However, few of such associations are; Nigerian Association of Teachers of Arabic and Islamic Studies (NATAIS), Academic Society for Arabic Language and Literature in Nigeria (ASALLIN), National Qur’anic Recitation Competition, Plateau State Chapter (1987-2003), Association of Area Court Judges and Members, Plateau State Chapter (1999-2002), Inter-religious Committee, as well as Muslim Community, University of Jos (1994-2002), Muslim Community Education Centre Rikkos, Jos (1987 to Date) and Education and Youth Development Committee, J.N.1. Jos (1990 to Date), among others.

As an accomplished academic, Prof. Wakawa has written no less than thirty (30) academic papers published in journals of both national and international recognition. He has also attended more than twenty (20) academic conferences, workshops and seminars. Since the beginning of his career progression in academics, he has graduated forty (40) post-graduate students, 22 of which are Masters while eighteen (18) are PhD degrees.  His undergraduate and post-graduate research works are;

Born on the 23rd of July, 1957, Prof. Abubakar S.I. Wakawa hails from Hawul Local Government Area of Borno State. Interesting about him is that he did not start a formal education during childhood. He was, instead, enrolled into a traditional Islamic education known as Tsangaya in 1967. It was at adult age, when he had already started a family, that he enrolled himself into an adult evening class at Metropolitan Evening School, Jos between 1978 and 1982, and later obtained a Grade III Certificate of Education at the College of Islamic Studies, Jos.

Prof. Abubakar Wakawa has eight (8) children and many grandchildren.

DEPARTMENTS AND THEIR HEADS